by admin
in Blockchain
0

“We are very excited to facilitate investing IRA funds directly into digital securities offerings,” said Carlos Domingo, Co-Founder and CEO at Securitize. “Issuers of digital securities will now have direct access to a new and massive source of capital connected to the Securitize platform, while IRA investors will have an opportunity to easily invest in deals they would typically not have access to.”

“We selected Securitize as our working partner for issuing security tokens because they are the leading solutions provider in this rapidly-growing space,” said Robert Nance, Managing Partner at CityBlock Capital. “The firm’s technology introduces us to significant, previously untapped liquidity while introducing IRA holders to the emerging companies reengineering our capital markets through blockchain technology.”

“We are thrilled to power the first-ever direct investment in a digital security via an IRA,” said Eric Satz, CEO at AltoIRA. “A truly diversified portfolio ideally allocates 10-20% to alternative assets. Yet, currently, only 2% of all alternative assets are held within IRAs and 401(k)s because their traditional custodians lack the digital infrastructure to expand beyond investments in public market securities. Alto is changing that. We bring alternative assets, such as private equity, venture capital, real estate and cryptocurrency, to the mainstream. Institutional investors have always had exposure to this space, now individuals have the opportunity to do the same directly from their retirement accounts.”

The announcement follows Morgan Stanley’s recent projection that a traditional investment profile with a 60/40 percent distribution between equities and bonds will return just 2.9 percent per year over the next decade, a concern among investors chasing stronger returns, navigating inflation and reducing interest rate risk. 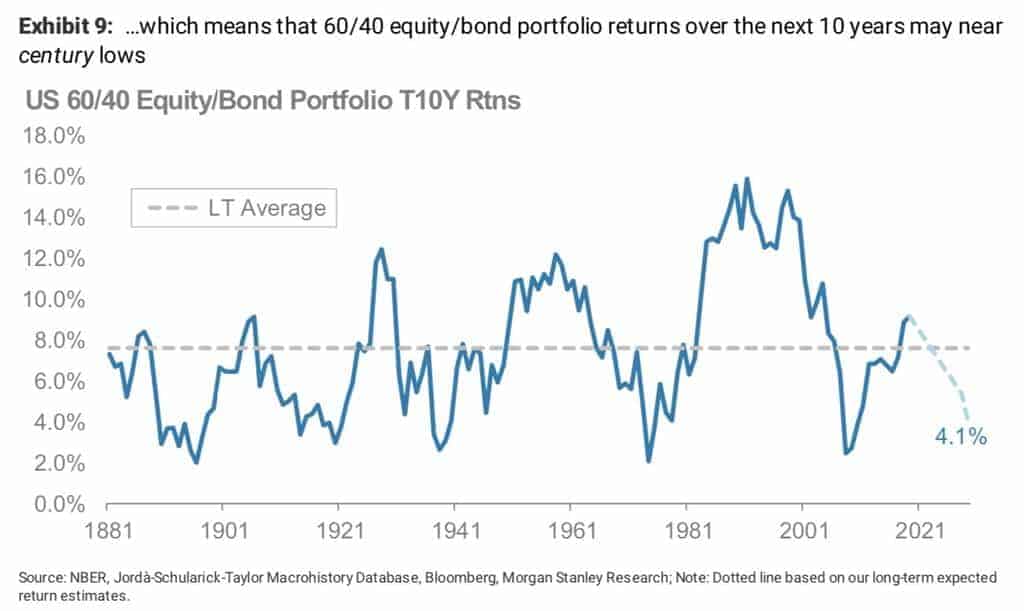 “The return outlook over the next decade is sobering – investors face a lower and flatter frontier compared to prior decades,” stated Morgan Stanley in a Business Insider report. “Investors will need to accept much higher volatility to eke out small incremental units of return.”

“US equities expected returns are dragged down by a combination of lower-income return, low inflation expectations and penalties on both higher-than-average valuations and above-trend growth that cannot be sustained for the next decade,” the analysts added.

A recent Greenwich Associates study reinforces this notion. Pension funds, endowments and other large investors have allocated $882 billion to liquid alternative investments, while institutional investment into liquid alternative ETFs will rise from $47 billion to $114 billion over the next 12 months. Amid concerns of over-investment, liquidity risk and composition risk in ETFs, security tokens provide a new form of direct exposure to alternatives.

AltoIRA gives consumers the ability to access and execute investments in alternative assets, such as private equity and VC funds, real estate, marketplace loans and cryptocurrency, using their retirement savings. Alto’s cost-effective and hassle-free technology platform streamlines the process for companies, funds, borrowers and investment platform partners to include IRA capital in their offerings. AltoIRA’s investment platform partners include AngelList, EquityZen, MasterWorks, Wefunder and more. Launched in 2018, the Nashville-based company provides investors with an opportunity to build diversified portfolios for retirement with tax-advantaged dollars. For more information, visit www.altoira.com.

Founder and publisher of industry publication Blockchain News (EST 2015), a partner at ICO services collective Token.Agency ($750m+ and 90+ ICOs and STOs), director of education company Blockchain Partners (Oracle Partner) – Vancouver native Richard Kastelein is an award-winning publisher, innovation executive and entrepreneur. He sits on the advisory boards of some two dozen Blockchain startups and has written over 1500 articles on Blockchain technology and startups at Blockchain News and has also published pioneering articles on ICOs in Harvard Business Review and Venturebeat. Irish Tech News put him in the top 10 Token Architects in Europe.

Kastelein has an Ad Honorem – Honorary Ph.D. and is Chair Professor of Blockchain at China’s first Blockchain University in Nanchang at the Jiangxi Ahead Institute of Software and Technology. In 2018 he was invited to and attended University of Oxford’s Saïd Business School for Business Automation 4.0 programme.  Over a half a decade experience judging and rewarding some 1000+ innovation projects as an EU expert for the European Commission’s SME Instrument programme as a startup assessor and as a startup judge for the UK government’s Innovate UK division.

He is a Canadian (Dutch/Irish/English/Métis) whose writing career has ranged from the Canadian Native Press (Arctic) to the Caribbean & Europe. He’s written occasionally for Harvard Business Review, Wired, Venturebeat, The Guardian and Virgin.com, and his work and ideas have been translated into Dutch, Greek, Polish, German and French. A journalist by trade, an entrepreneur and adventurer at heart, Kastelein’s professional career has ranged from political publishing to TV technology, boatbuilding to judging startups, skippering yachts to marketing and more as he’s travelled for nearly 30 years as a Canadian expatriate living around the world. In his 20s, he sailed around the world on small yachts and wrote a series of travel articles called, ‘The Hitchhiker’s Guide to the Seas’ travelling by hitching rides on yachts (1989) in major travel and yachting publications. He currently lives in Groningen, Netherlands where he’s raising three teenage daughters with his wife and sailing partner, Wieke Beenen.

The Blockchain Advocacy Group The US Chamber of Digital Commerce (CDC) is filing an amicus brief advocating for a predictable...

Deloitte has rolled out its bullish 16-page report and viewpoint on Facebook’s Libra Project, calling it a bold new proposition designed...

The US Securities and Exchange Commission (SEC) has charged former Stevie Award winner and SEO champion Sergii “Sergey” Grybniak and...

The Bank of England (BoE) has made the mainstream media reporting landscape once again about adopting cryptocurrency. Or what they...

No Result
View All Result